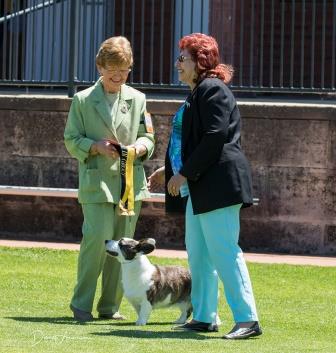 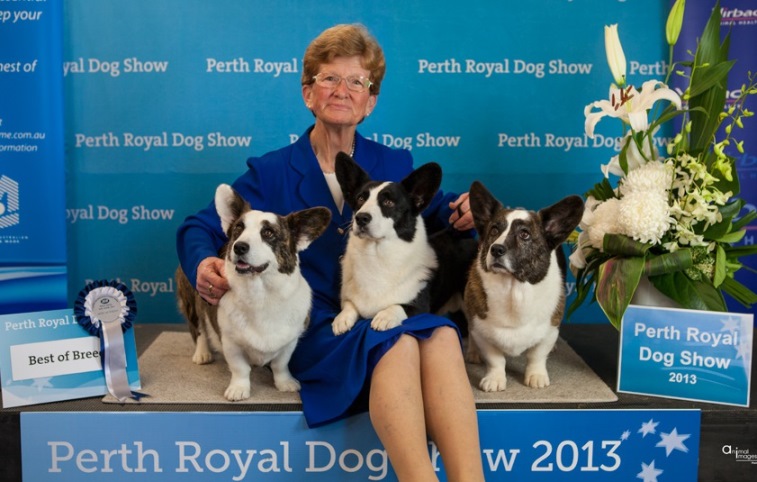 January 2014 – Lindy makes her debut in the show ring capturing the judge’s attention with her outgoing personality and winning Best Baby in Group. At the same show Joy (Ch Neut Ch Cardiwest BountyOvSpring) was awarded Best Neuter in Group, then Best Neuter in Show. This was a great result for the Cardiwest team.

December 2013 – JB is Top Intermediate Working Dog 2013, based on all breeds point scores. Awarded by the WDC of WA(Inc). We are so proud of this little girl who has retained her loving personality.

October 2013 – Perth Royal. At 6 weeks pregnant JB is awarded Best of Breed. This little girl is such a pleasure. The photo above shows JB with her parents Hummer and Joy. We had a fun time at the Royal.

July 2013 – JB caught the judge’s eye again. Mrs C Pickering awarded her Best Exhibit in Group. What a buzz. There were over 90 in the group.

November 2012 – JB is awarded Intermediate of breed by Breed Specialist Ms T Irving (UK) at the Corgi National in Melbourne. Such a proud moment to have one’s breeding recognised.

26 November 2011 – Joy is on a roll – Best Neuter in Group and Best Neuter in Show. It is unfortunate that more Clubs in WA do not offer the Neuter Class.

19 November 2011 – Joy’s first show since her emergency sterilisation – Best Neuter in Group and Best Neuter in Show. At the same show the brace pair of Joy and JB were awarded second place out of an entry of 7. Well done girls.

5 October 2011 – Perth Royal and her first Champ Show since she became ill. She did so well and won Best of Breed. What a little Champion. She and her father took the crowds in their stride and seemed to really enjoy the pats and cuddles; such sweeties.

5 August 2011 – JB has been out of the ring for a while. At the end of June she became unwell and needed surgery where it was discovered she had eaten a piece of a rubber ball which had perforated her bowel. This has been repaired and she has made a full recovery and we hope to see her back in the ring in the near future. We have puppies at the moment and do not exhibit when the puppies are very young.

Apr 9 2011 – JB has had 3 Best Baby in Group wins over the last month but today she went the next step and was awarded Best Baby in Show by Mrs J McRae (WA) at the Hills Kennel Club Open Show. Such a proud moment; she is a very special little girl.

Sept 6th 2008 – At her first outing since her litter in January Joy is awarded Best of Breed by Mr Nigel Wood (Q’ld) who was impressed with her movement and repeats it the following week under Mrs Annette Anagnostis (Tas) – she still has it!!

October 14th 2007 – Joy is awarded Runner-up Best in Group by Mr P Thompson, and then goes on to win Intermediate in Show. Well done, Joy.
Sept 30th 2007 – Perth Royal Show – She did it again. Joy is awarded Best of Breed against very worthy competition by Mrs P Heikkinen-Lehkonen (Finland). Joy is a very typey girl who moves like a dream. Well done, Joy. And her father was awarded Challenge dog for the 4th consecutive year.
Sept 9th 2007 – Not to be outdone by his big brother DJ is awarded Minor Puppy in Show by Mrs G Cook (Vic), breed specialist at the Hills Kennel Club Championship Show. Well done, DJ
Sept 2nd 2007 – DJ again takes the Challenge but his big brother, Chaos, is awarded State Bred in Group, then State Bred in Show by Mrs A Mitchell (WA) the Building & Amenities Championship Show. A proud moment for the CardiWest Crew!
Sept 1st 2007 – DJ takes Best of Breed over the older ones and is awarded Minor in Group by Mrs M Cochrane (WA).
July 28th 2007 – DJ is awarded the Challenge, Best of Breed and Best Minor Puppy in Group at his first Championship Show out of the baby classes. Well Done DJ!